The Arrival of Manitou 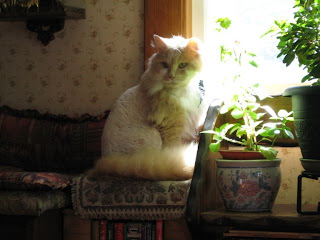 His name is Manitou, aka GlamourPuss. Here he is in all his golden splendour - it looks as though he is glaring down at one of his "underlings" - he, he - he may find out otherwise!

Here is his story: First time we saw him was over a year ago – he was just visiting – his fur was very matted but nothing like how it was when he came again 2 weeks ago – they were like rocks, poor thing - and coming off with his skin in some spots. He was in a dismal condition – so - we rescued him!! Much to the chagrin of the other furry inhabitants, especially our little black Angel who goes hyper-ballistic when he just looks at her (those females!) He is youngish – the vet said about 2-4 years old – happily he has all his teeth and claws, but sadly for him, he underwent another "procedure" whilst he was under being shaved (it was that bad). So – for 2 weeks his hormones kept raging – howling to go out. He seems to be finally settling down – he LOVES head-butts!! And he just wants to play with the others, but they are soooooo boring - he's wondering if he's entered a kitty retirement home! Hopefully things will settle down – it can get hairy at times!

Email ThisBlogThis!Share to TwitterShare to FacebookShare to Pinterest
Labels: Cats