The Bandito Who Stole Our Hearts 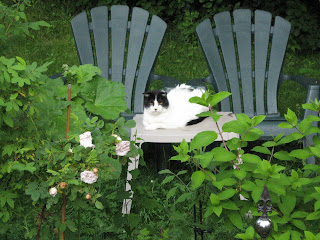 The big Bandito (Dito most of the time) went to the vet last week. Since he is a senior boy, we think he could easily be 13 or 14, I was afraid to have him put under anesthesia for his bad teeth and gums. Thankfully he made it through just fine and seems much happier despite the nightly forced pill-popping sessions (only one more week to go for the antibiotic treatment, then it will be back to one small pill for his diabetes). Dito was rescued from the cold icy outdoors of Québec, but it took two years to actually get him inside. It was a slow and gradual process of gaining his trust. It took months before I was able to tough his nose while he sat shivering in our cat basket on our porch. We felt sorry to see him like that, but at least he was safe while he visited us – we had to focus on the positive and on the small progress that was being made weekly. To cut a very long story short (and some of you may have heard it before), he spent well over a year sleeping inside the screened-in porch which we made accessible via a small opening in the door. It broke our hearts to see him sleeping out there in -30 F weather, but at least he had shelter from the wind and was safe from other types of harm. He made the big leap into the main house just in time, as eventually all manner of visitors were coming in for snacks: neighborhood cats, stray and otherwise, a couple of fat raccoons (these guys visited nightly and we had no idea why the cat crunchies were disappearing so fast until we caught them in the act) and finally, even a baby skunk that luckily was too young to know to be scared! Some of the locals I am sure still talk about the good old days when the all-night diner was open year round. 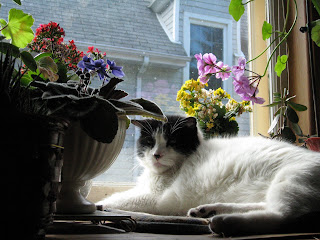 Anyway, Dito was now secure in the main part of the house and the next step was to make that inevitable trip to the vet, where all newly rescued members of the household have to go. My goodness he was a very pungent fellow before he got fixed! I have never encountered that strong an odor with an unfixed male cat before. He needed the usual procedure and also ear treatment. The big leap of faith for Dito came after he returned. We were afraid to let him back outside again – afraid the experience was too traumatic and he might decide to never return. But – out he went and we said a little prayer for his safe return. I don’t recall exactly how long it took, but it seemed forever, as we went to the door a hundred times, and still, no Dito. Then, at last, there he was!! A little hesitant to come in (to this day he kind of charges in and out - as though summoning all his courage), but in he came and the rest, as they say, is history. He loves to roll on the floor and get big-time belly rubs – he can’t get enough of those, and he also insists on trying to kiss Timmy (the grey one), even though Timmy regularly tries to ambush and spook him. That’s our Dito-Sweeto!

Check out more sweeties at The Friday Ark and then Carnival of the Cats on Sunday.

Email ThisBlogThis!Share to TwitterShare to FacebookShare to Pinterest
Labels: Cats