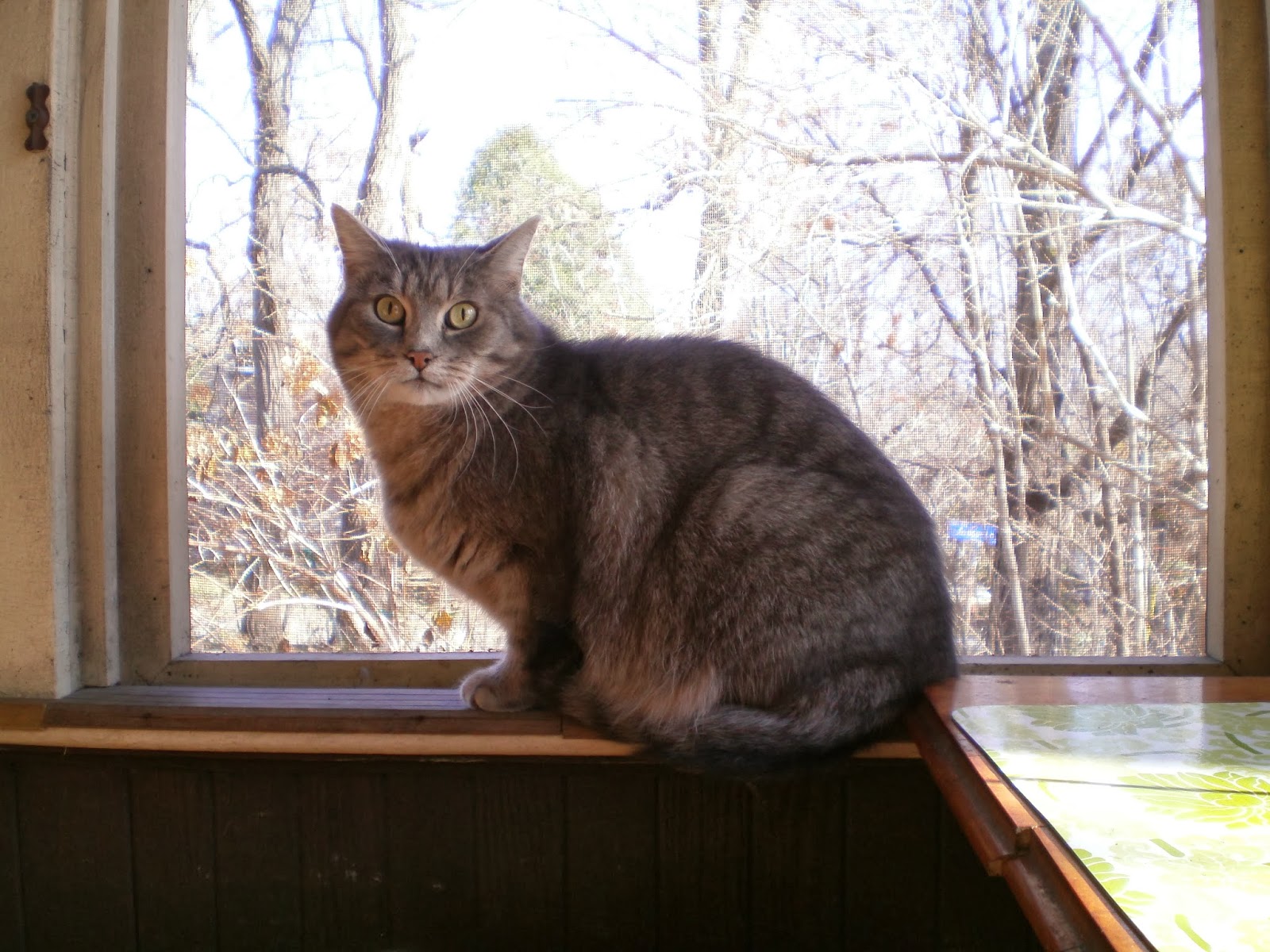 This is Zena, Princess Warrior. Zena spelled that way on purpose. She is our recent rescue, and what a story she has! Even though we are FULL, cat-wise, what with refugees from the cold and our own gang, this was a very special case, quite the exception. She was living out on the streets for God knows how long until she found my friend who loves cats. Never comfortable to be inside, this kitty was basically living for 4 years outside on friend’s porch (screened with plastic in winter),  and further protected against cold with many sleeping bags, blankets etc.) She got tucked in securely every night, with just a nose barely showing! Long story short, friend suddenly had to move from her house this summer, and this little one, which she had named Sillyhead, was suddenly really homeless - her world as she knew it, shattered apart. The people who bought friend's house were not cat lovers - had dogs - imagine the scenario. But friend would not abandon SH, no way: she went EVERY DAY back to her old street, calling for SH, and feeding her well, and making sure she had water and at least an hour of companionship.

This went on for 3 months during the summer! I went along a few times as we tried to coax her into a carrier (I had already agreed we would take her, if she were captured). Unfortunately, this kitty was very very wary, and would not allow herself to be captured. Finally, after 3 months of this,  another circumstance arrived that meant it was "now or never" to catch the elusive Sillyhead. It was her last chance. Somehow, she must have known this, as the much anticipated “Gotcha Day” arrived when I received the phone-call "I've got her!" That was August 29th.  And it has not been exactly boring ever since she arrived.

Of course, we went through all the appropriate procedures when bringing in a new cat into the house: 2 weeks or so sequestered, gradual introduction to the others etc. But most did not warm to her at all! So much growling and hissing, and general grumpiness. To make matters "worse", SH, now renamed Zena, Princess Warrior, due to her "spunk" and daring behaviour, has decided to take over the bedroom, and basically the entire upstairs, much to the chagrin of the others, who regularly slept with me on the bed.

For a while the resident grumps were in self-imposed exile in the basement. Chaiyka, the big tabby, joined in in solidarity as shown in the photo below,  even though he was cool with the new one. In fact, I have learned that in many multi-cat households, there is often a “facilitator” cat, that makes friends first, and tried to smooth the rough edges. He does try – such a good boy. The rest remain on high alert, eyes wide and terrified every time they catch a glimpse of the stealthy and speedy Zena, Princess Warrior.

But she has become very attached to me, and when alone with her, she is “little mouse”, close to my side. She also loves her little basket in the bedroom, and her spot near the window that, on sunny days, is the place to be. And besides, no one else had been using it.

She also loves the window garden – now THAT is prime real estate – everyone loves to be there, as is a frequent backdrop for fabulous photo-shoots that feature both  cats and flowers. A perfect combination.

But of course, cats have short memories sometimes. Here is Zena anxious to go out the back door, despite her many years out in the cold. I think that is where they have it over us: they get over things, and get onto the next challenge or adventure.

After a week or so, the "refugees" in the basement relocated to the ground floor, where they are "suffering" on the living-room couch - such hard times! 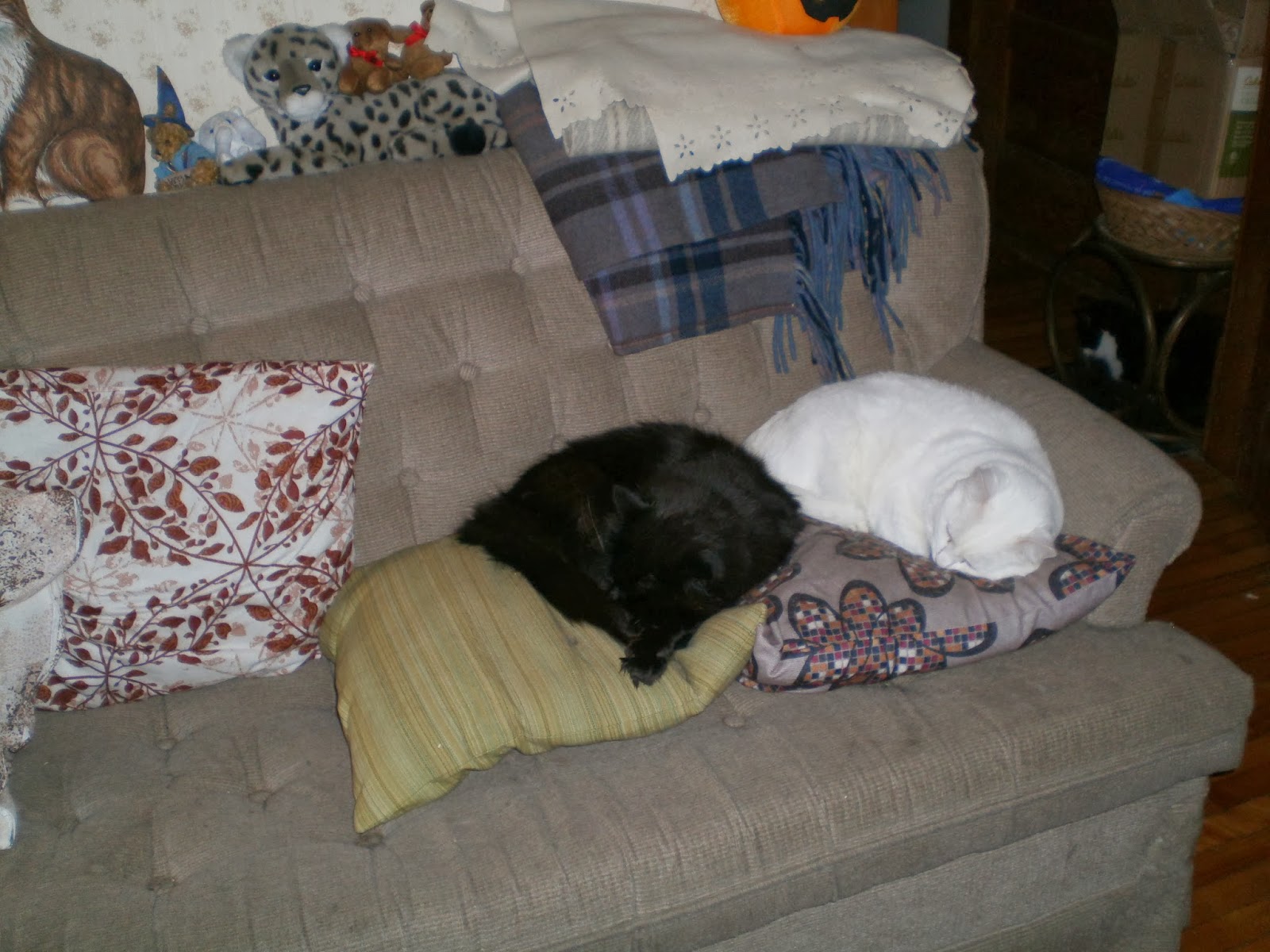