On the Death Of David Bowie: we all shine on 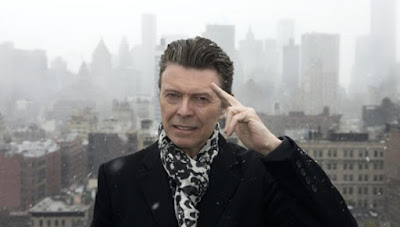 There are a few musical artists that I connect directly and especially with my brother. After we had come to the age where we both could enjoy music as equals, despite our 7 year age difference, he would come home from a local music shop, or from Montreal for the weekend, with a fresh stack of records, his new treasured discoveries and play them on the old family stereo. Oh, but the memories - new music - dancing in the living room. Sneaking a drag from his cigarette. Mum shouting from the nearby kitchen to "turn it down" - (but, occasionally there was a piece or two she enjoyed as well). Or, we just sat and listened. I had a good teacher - he introduced me to the best.

The Rolling Stones (the gift of the scandalous Sticky Fingers album - had to hide it from Mum!) - inscribed by my brother - "the greatest rock and roll band in the world." No, not the Beatles. I do not recall him ever playing them. How odd. But, as they say - there are two types of people - the Stones, or the Beatles. Alex was Stones all the way, as am I.

The dark, exotic and totally different Exuma, for me, an impressionable young teenager. From the first sounds of footfall on gravel, then silence, then wolf howl - it was another world, indeed an otherworldly experience. Especially after everyone was gone to bed, me with headphones in bed - the booming intro travelling from one ear, through my brain, and exploding into the other ear. Totally awesome and transporting.

Patti Smith (Because the Night), Isaac Hayes (Never Can Say Goodbye - Alex's anthem), ... and David Bowie. Since the news of his passing, many of us have of course revisited the big hits, and some less so - his music was a soundtrack to my growing up, with Alex, without Alex - too often. When one of these "contemporary" artists passes, what follows is always this feeling of loss - again - my brother, and distant memories of when we were young, and healthy, and life and happiness seemed to stretch endlessly before us. We didn't think, we just were - in the moment. Now, with aching joints and and aging eyes, and a face that shifts ever so slightly day by day, I sometimes dance, alone, in my living room, and remember. I dance alone, until I catch myself, feel foolish, and stop.

I dearly wish I believed in some greater power, some divine place where all those we love and have departed are cared for safely though eternity - until we meet again. I wish I could believe - I just don't know how. Instead, this endless period of mourning  enveloping my life, obscuring every path forward. I hear songs on the radio or online, and I think, yes, Alex would have liked that. And how he would have loved this "new" technology - to listen to music everywhere, anywhere.

Postscript - a sign (always looking for signs)?
John Lennon, as I was about to post this, came on the radio to sing:
"We all shine on, like the moon and the stars and the sun...shine on shine on......"
Wow. Eh?