Well, almost a year will have passed since my "Lovely Girl" passed over to the Rainbow Bridge. Here she is at her favourite spot in the sun - where I would often find her in the late afternoon - in the later years warming her old bones, eyes shut tight and deep in meditation. She was around 20 or 21 years old. Also, a picture of her at the picnic table - at this time she was at her prime I think. 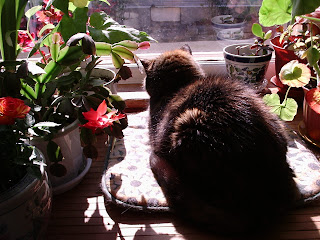 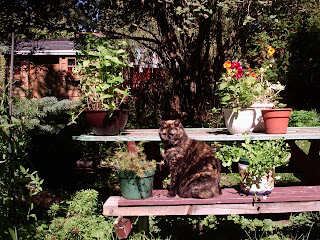 Mishka was a feisty girl, and I would often recall a passage from a book I once read describing tortoiseshell cats as: "gretchen-like and only feign to be domesticated."

Mishka came as a very young cat from the alley-ways of Montreal when we would stay at a friend's house during the Jazz Festival. We fell in love with her and brought her home with us - a short 2 hour ride away. She ruled the house, and never forgave me for bringing in all the rest of the rabble - and she always taught the new-comers to walk backwards when coming upon her - I kid you not! They actually would walk backwards! I don't want to dwell on her short but tragic illness that finally took her - and I can say it was agonizing to let her go, but she was suffering so much. She was buried in a tranquil and isolated patch of garden which we dubbed the "Montreal Garden" because it is so small. My garden in total is huge, and the typical Montreal garden in the city centre is tiny - it is what she grew up with, so it was a propos. Before winter set in, I planted some lilies called "Lovely Girl" at her grave. They are in bloom right now, and here is a picture of one - I wanted to take a shot of more just now, as many blooms are open, but it's pouring buckets as it has been all summer. Rest in peace my Lovely Girl, Mishka. 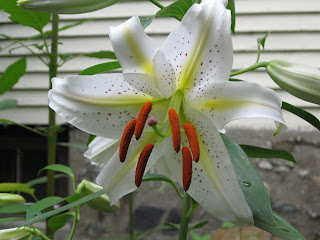 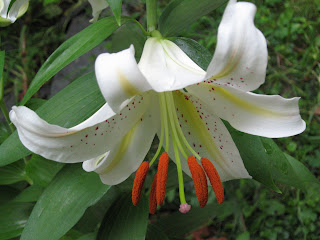 Don't forget to visit The Friday Ark and then Carnival of the Cats on Sunday.
Posted by Anya at Friday, August 08, 2008

Email ThisBlogThis!Share to TwitterShare to FacebookShare to Pinterest
Labels: Cats, In Memoriam