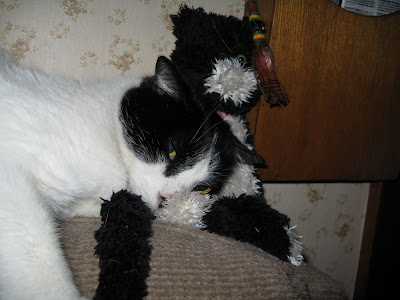 When our PeeBee (rest his soul) was under insulin therapy, we had set up an alarm to remind us it was time to give him the shot. The alarm was on the computer and it triggered a particular piece of music to play. Now, another of our cats (Dito) has been diagnosed with diabetes, and although for over a year he seemed to be doing fine just on oral medication, he now has to have shots of insulin. So, yesterday morning, the TV music station was on, as we were preparing Dito’s very first shot, can you believe what happened? That same piece of music, PeeBee’s song, came on, as if right on cue! Truly amazing, don't you think? But as you can see, he is ever watchful, so giving these shots has to be well-timed. His pal is watching too ;)