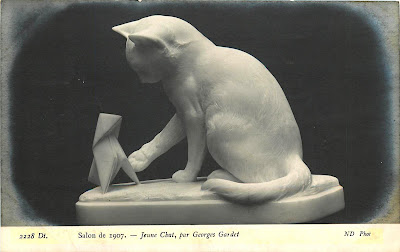 As an archivist, loving all things vintage at work and at home, I was happy to have made this recent purchase. It is breathtaking in its simplicity, and the fur looks almost real (click on the picture to enlarge and you will see what I mean). This is a superb study of a young cat with an outstretched precocious paw ready to tip the origami and indeed makes me think of the precocious Tristan who loves to nonchalantly toss things off tabletops.

And after having done a bit of "research" on sculptor Georges Gardet, I feel especially pleased to have something of his works, albeit only a humble postcard of "Jeune Chat" (young cat). I wonder where this piece is today???

Georges Gardet (1863 - 1939) was born in Paris, France on October 11th 1863. He was a highly talented sculptor whose early studies were with his sculptor father, Joseph, and Aime Millet. He was influenced early in his career by the works of Emmanuel Fremiet whom Gardet studied under at the Ecole des Beaux-Arts. Big game animals fascinated Gardet and his detailed treatment of these subjects is reflected in this interest. His fascination with animals was not limited to just the large wild ones as he did a number of small works of domestic animals and even a few private commissions of "pets" also. All of his animals are executed in an extremely powerful vein, each having an individual character of its own unlike many of the other sculptors of his day who were coldly producing static animals in bronze. His subjects are proud and romantic and this combined with his very high technical standard of detail and finish leaves a lasting visual effect. Occasional glimpses of the late Barye's influence are found in the treatment of his combat groups.

He started to exhibit at the Salon des Artistes Frances in 1883 at the age of twenty, and continued exhibiting throughout his long carrier, culminating in the Grand Prix at the 1900 Exposition Universelle. His monumental works include a Bison and Jaguar for the entrance of the Museum of Laval in 1892, Lions to ornament the stairways of the Alexandre III bridge on the Right Bank in 1900, as well as several monumental commissions for private Chateaux through France. Not all of his models were cast in bronze, many were originally carved in marble and a few were done in Onyx and only reproduced as bronze reductions for the most popular groups. Many of his works were produced in unglazed porcelain by the Sevres factory. He is considered by many as the finest animal sculptor of the late Animalier period.