Following the unseasonal heatwave, the frosty weather returned somewhat, and even with a fair bit of snow-cover. All that has mostly gone now, and within a day or two we will have nice spring sunshine. Four days of holiday at Easter were cold, grey and grim, to which was added me being sick and Bandito needing to go to the vet again. Original vet suggested we may need to consider letting Dito "go". So off to another vet for a second opinion which didn't reveal much else except some dirty ears. But - he is home again, and seems to be improving. Background: He had begun to exhibit a strange continual mouth-clawing (self-harming) behaviour. The sides of his mouth and inside in the gums were terribly bloody and torn up, hence our distress and subsequent vet visit. We assumed it had simply been a reaction to the bad tooth, which has now been gone for well over 2 weeks. Both vets were mystified with the problem - we are thinking maybe a growth under the tongue or in the throat? So he came home with an Elizabethan collar, a Buster, as it's now called for some reason. This is to prevent scratching and while it did the trick, he could neither eat, nor sleep with it on. So, since his claws have been trimmed to an unprecedented shortness, the collar came off gradually and - he seems to be better. The scratching has diminished. Not to mention the fact that he was given special diabetic food, which he categorically refused to eat ("hey guys - this food is making me gag!"). So, I figured, no eating = no cat. He is bone thin as it is. So, I said, well let's just give him his old favourite food back and see what happens, and voila! He is now gobbling it down like crazy. Sigh. 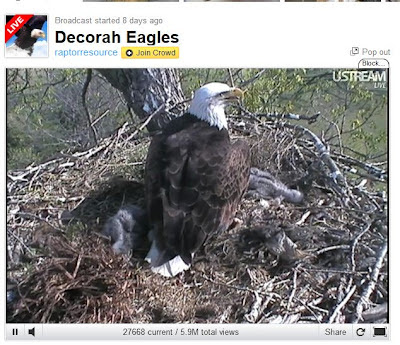 And now for something totally different:  while at work, I glance over at the Decorah Eagles UStream site once in a while. So fascinating and I actually saw the first eaglet hatch live - but they sure are growing fast. Observing all the care Mum and Dad eagle give their little ones in truly amazing - one could really watch for hours :) 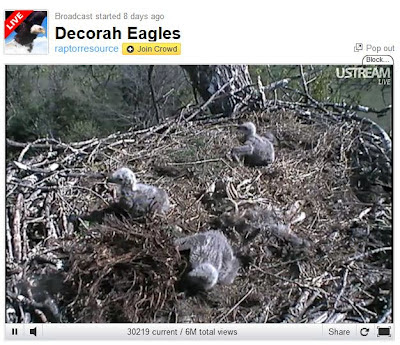