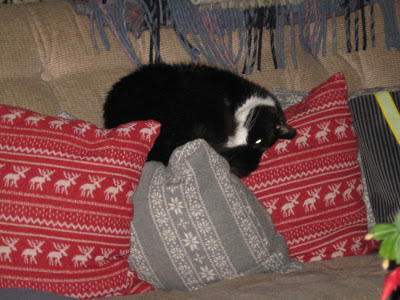 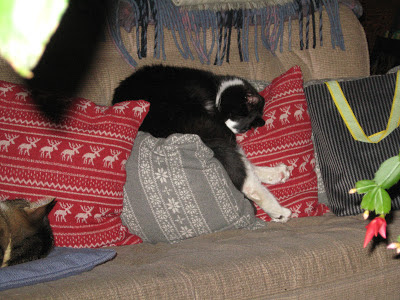 The flower baskets have given way to festive wreaths around town, and I realize that an update is way past overdue.  The main subject is of course, our Longfellow. Whatever trauma he suffered due to his accident, the nature of which we will never know, has happily passed by, and he is his usual “odd” self. After several trips to the vet, the last one, which featured the evil man making an appearance in the house no less, caused our poor boy to say, “enough” and promptly went into a self-imposed exile in the  spare room upstairs. Food and litter had to be relocated just for him, as any attempt to bring him back downstairs was fruitless, and resulted in a quick escape back to his safe place. After close to a month of having our patient sequestered, with door open by the way, one of his last such escapes was surprisingly quick and effortless, and that is when we realized his recovery was almost complete – he was simply having a psychological issue that had to be overcome, in his own good time. Whatever had happened to him, it resulted in a torn leg, a torn belly, and the need to relearn how to use a litterbox – he had suffered a huge shock, but he was coming out of the dark at last – we had even been “prepared” for the worst – that’s how bad the situation had seemed. Now, he is eating, drinking and all the rest, just like normal. One day, he simply left the “recovery” room and didn’t go back. Although he is quite thin – he is close to 15+ years after all - our Longfellow has been restored to us.
Posted by Anya at Sunday, November 25, 2012

Email ThisBlogThis!Share to TwitterShare to FacebookShare to Pinterest
Labels: Longfellow