Winter Solstice and The Crossing

Today we have arrived at the shortest day of the year. From here onward, the road leads toward spring, as far off as that may seem. Last day of work. I am pensive - verging toward depressed. I didn't even go to the company holiday lunch, although there were pretty good reasons not to go, according to me - ha ha. I have had, instead, a nice private time in my office: Christmas music, a bit of wine, and the freedom to sing out loud, as vigorously as I pleased. It felt good. The way I feel now, as someone once said - it is best I am where people are not. Outside, not festive at all: sunny, mild, no snow - yuck. I am a whole week behind my home "trimming", not even my tree yet - hopefully tomorrow, with the plunging temperatures, we will have some snow, and finally I can cheer up the house, and maybe myself as well.


I keep looking for signs, a reason to believe. But sometimes I forget the ones I have seen, or simply scoff that it must be some weird coincidence. But I have one to share that defies such cynicism - even for me. It is the end-story to our dear departed Bandito. I have not had time or heart to write about it yet. After he left us, it was up to Cat Wrangler, as usual, to perform that most horrible of tasks: the digging, and the burial. We have a huge garden. And that allows for many spots to be chosen, while at the same time avoiding areas filled with tree roots, impeding the digging. CW chose one - then suddenly changed his mind and chose another, near the old lilac tree: a totally random spot.  But well chosen, it will become clear. And so he began to dig. His spade eventually hit something  large, metal and old. With some effort he unearthed a very rust-laden and very old car jack. On it, barely visible, were the words "Alliance, Ohio."  First of all, after a quick "google", I learned that Alliance was originally known as "The Crossing" (crossing to the Rainbow Bridge?). It gets better. This year, in 2012, Alliance, Ohio was the place where the first feline historical museum in the U.S. was opened by the Cat Fanciers Association. That's right. Also, their special exhibition this year was one featuring the famous maneki neko. Earlier this summer, as Bandito had began to fade, our own maneki neko was moved from upstairs to the summer porch - where he finally left us. 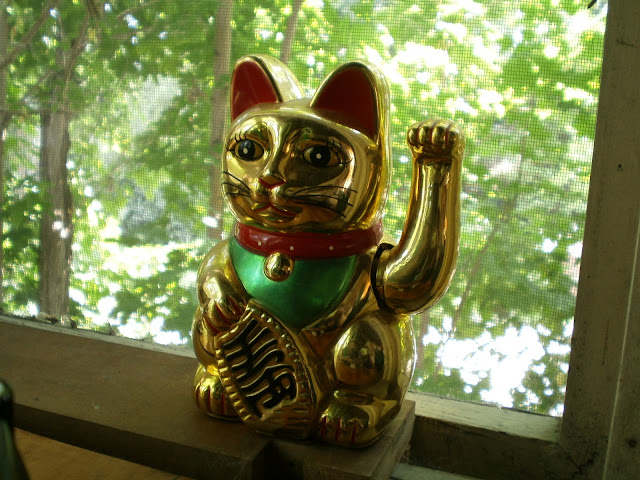 Email ThisBlogThis!Share to TwitterShare to FacebookShare to Pinterest
Labels: Alliance, Bandito, The Crossing