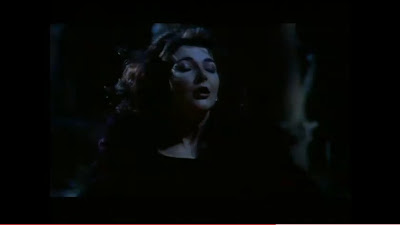 It has been a Heathcliff, Wuthering Heights, and Kate Bush kind of a week. One image leading to another - then to a feeling - and still later to an impression, from long ago - barely there just hovering in the the mists of time. My time - my long ago time. YouTube is great. I needed badly to see and hear Kate Bush performing Wuthering Heights, and Sensual World, the latter of which is stunning, and I believe her mysterious magnetism caused unexpected emotions in both men and women. It still does from the comments I have read. One person commenting on the Sensual World video said: "Would that we could all have ourselves digitally stored at the height of our powers." The height of our powers indeed - when we were young and the future stretched before us like a limitless shore. We could not see what was ahead, nor did we care to. The moment was all.

So sings Kate in Babooshka. Flashback to the Limelight, Montreal in the 80's with my brother and sister. It was the Studio 54 of our youth. How did I look when I was dancing there?

"Would that we could all have ourselves digitally stored at the height of our powers."

If I could go back, and see that young woman dancing - surely now I would think she was perfection - life was perfect. But would I give up today for yesterday, if such a machine or magic existed? The futility of backward glances. Such random ruminations. Is it because spring is coming? Because "April is the cruelest month", as T.S. Eliot observed:

April is the cruelest month, breeding
Lilacs out of the dead land, mixing
Memory and desire, stirring
Dull roots with spring rain.
Winter kept us warm, covering
Earth in forgetful snow, feeding
A little life with dried tubers.
[....]
I will show you fear in a handful of dust.

Yes, memory and desire. Forgetful snow. Every once in a while one reads a poem or lines in a novel, and you know, you just know what is true, and you feel the very essence of what the author meant to say, what he felt, what it means to be alive, yet also to mourn. Not one without the other.

Well, speaking of dried tubers - my dahlias are quite alive - sprouting away in the basement. Always a little bit of a miracle when I discover those beautiful green, healthy shoots - emerging from such ugly, sometimes grotesque shapes and forms. There is hope.

From Fate's grim palette
Time paints our days
With the colours of Destiny.
One broad sweep
And our day is made
With contrasts of harmony.
By merely the turn
Of a finger of Time
Joy or woe may come
With the bliss of blue
Or the gloom of grey -
Or however the tints may run.
Though hidden deep,
At times not found.
In the shades of night
Or in the mists of day,
There still remains
For those who seek,
Beauty in the grey.
Posted by Anya at Friday, April 01, 2011